Back to Grandma's yard 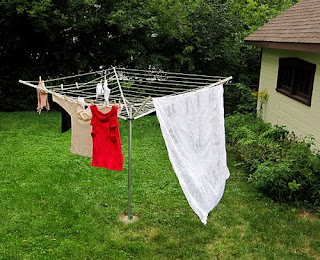 Once we moved into our house, I unconsciously began reassembling my favorite elements of my grandma's house. It was built around the same time as ours, about seventy miles away.

I planted the lilacs I remembered, and purple iris, four o'clocks with their small round seeds like little cartoon bombs, peonies and black-eyed susans and mint. I've had tomatoes some years, and chives, and geraniums that were her favorite shade of coral pink.

Now that we have storm windows with screens, we can open the windows on days when it's not too hot and get a very satisfying and soothing breeze.

I even found Sweetheart Soap, the smell of which takes me back to being four years old again.

And now I have a clothesline (I suppose we have a clothesline, but it's mostly mine), an umbrella style clothesline that you take down when you're not using it. When I was little, we could hang a sheet from each of the four sides and I would have the best garden house (girl equivalent of a fort) you could ask for. I tried it out today for the first time, and yes, everything dried just fine and blew picturesquely in the breeze especially for my benefit.
Posted by stwidgie at 8:35 p.m.