When I studied linguistics in college, I had to take courses in phonology and phonetics. And I learned that despite having the sound "fun" in its name, phonetics was pretty darned dull. Though I did learn that any healthy human is capable of making the exact sounds of any language, and that was encouraging. (It's not that you can't make those sounds, you just don't make them on purpose yet.) Phonology was somewhat better, because it went into how sounds are used in a given language, and that was a welcome departure from the pure mechanics of speech production.

Although I was ambivalent about these subjects, they did give me one excellent tool that has stood me in good stead ever since: the International Phonetic Alphabet IPA), used for phonetic transcription.

Just as you can use musical notation to record a melody on staff paper, IPA lets you transcribe the exact sounds of any language. Once you have a good command of it, you can accurately record anything you hear on paper. Very low-tech, and very handy.
I've used it for transcribing songs before I understood all the words. I've used it to improve my accent in French. I've used it to get a handle on how people from different dialects of Irish pronounce the same word.

The lack of it in my first Irish textbook ((See if you can) Teach Yourself Irish by Myles Dillon and Donncha ó Cróinín, 1961) convinced me that I could not learn the language from a book because I would never be sure how to pronounce anything. (The book did have a pronunciation guide, but it described the symbols it used in terms of sounds in common English words, probably in an Irish English or British English accent, which was useless to me. I come from a place where we actually say our r's, and I make no distinction between the vowels in the pairs tool/tune, do/duty, noon/new, loose/lure. And if you give me weird words, it's as good as no help at all: good/gules(??) Another odd thing about that book: it used IPA in the glossary, but this other odd system throughout the chapters.)

Once you have a way to describe what you are hearing, it improves your ability to hear the fine distinctions, and it's a great help toward actually producing the sounds intentionally yourself. Once you have a target to aim for...
Posted by stwidgie at 8:45 a.m. 2 comments:

Record rains in the region

The commuter train was crowded as usual this Monday morning. Sitting on the upper deck, everyone was minding their own business, snoozing, meditating, working, reading the paper -- until we neared Des Plaines, Illinois. There we cross the Des Plaines River, and with the record rainfall we had over the weekend, I knew there would be dramatic flooding there. Everyone paused in what they were doing and turned around to look out the window. There was a chorus of quiet exclamations.

I found a video someone shot from the train yesterday, coming in the opposite direction, and it gives you an excellent idea of the flooding and people's reactions to it. The river peaked in Des Plaines at ten feet.

We set a Chicago area record for rainfall in a calendar day with 6.64 inches on Saturday. Since the rain continued through the weekend, total rainfall for September so far is 12.61 inches. (The 1961 record was 14.17 inches.)

I was in Northwest Indiana over the weekend, and the rain severely affected low-lying areas there. One big consequence was that they closed one of the two east-west interstate highways that cross the area. Here are a couple more photo collections: Selil and releeh.
Posted by stwidgie at 7:17 a.m. No comments:

Wordle Essay: How I spent my summer in Twitter 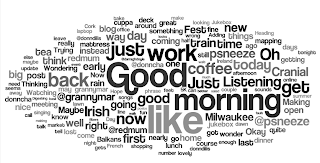 Built this in Wordle.net

(see it properly in the gallery)

Had another one of those epic dreams last night. It's what comes from reading a whole novel in one afternoon. I was staying at some resort or retreat for a few days, for an Irish language immersion workshop. (No, I don't remember if I was dreaming in Irish. It has happened, though.)

As our group was gathering for dinner, I happened to run into a friend I know from a completely unconnected volunteer group. Although Jeanne B. and her husband are a generation or so older than I am, we always find plenty to talk about; we try to sit by them at dinners so we can enjoy the conversation. In my dream, I sat down with them at their table for a bit, while the servers brought the first course.

We were quite surprised to see each other there. In fact, Jeanne had evidently invited me to join them there for a few days as their guest, and were a bit hurt that they hadn't received a response. I was unaware of the invitation; it turned out she had left the invitation on my Facebook site, which I never visit.

As we were digesting this misunderstanding, my Irish teacher came by to bring me back to the table where the class was sitting. To put the icing of awkwardness on this half-baked cake, I politely introduced Jeanne B. as Marjorie D., and couldn't understand why she was now scowling at me.

Obviously, it was time to wake up and save myself from this faux pas de deux, so I did.
Posted by stwidgie at 6:06 a.m. No comments: