The other day I read a great column by Jean-François Cliche, a science writer for the Canadian newspaper Le Soleil. It does a neat job of debunking the 2012 Mayan apocalpyse. Since I've heard this debated by well-educated colleagues in the scientific agency where I work, I'm offering a translation of this excellent article in hopes of clearing away some of the silly mystique around this hoax.

(Quebec) “I'm writing to you because I've got questions about the date December 21, 2012. We know that the planets of our solar system will be aligned on that date. Some people say that the poles will change position. Others say that storms will be much more frequent and more violent, and a number of others speculate that it will even be the end of the world. As far as I know, this kind of alignment already occurred 5000 or 6000 years ago, and we're still here. From a purely scientific standpoint, what can we expect?” writes Michel Gagnon.

With last week's release of the film 2012, which paints an apocalyptic portrait, it's certainly a question people are asking. What's more, a plethora of New Age websites are predicting all sorts of spectacular events for this so-called special date. In itself, this isn't terribly surprising, because humankind has been seeing omens in astronomic phenomena for millennia, according to the physicist and popularizer Sébastien Gauthier, of the scientific communication firm Cosmagora. He recently gave a lecture titled “2012: how to survive the pseudo-scientific discourse” at the Collège F.-X.-Garneau.


But the thing that's particularly astonishing in this case, says M. Gauthier, is that there will be no alignment of the planets on that date! Absolutely none, as you can see on this map of the solar system which shows the position of the planets (calculated by a NASA simulator) at high noon, universal time, on December 21, 2012. http://space.jpl.nasa.gov/ Unfortunately, this doesn't stop false rumors from circulating on the Web... 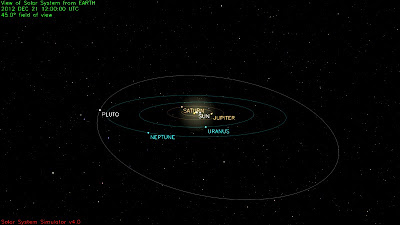 (Anyway, even if all the planets did align, there wouldn't be the slightest consequence. A few small calculations show that the combined gravitational effect upon Earth of the seven other planets is 61 times weaker than the pull of the moon. So as far as this author is concerned, they can go ahead and align as much as they want.)

According to M. Gauthier, the “popularity” of this date 12/21/2012 stems from the recent craze in New Age circles and other more or less esoteric groups for the history of the Mayans, that great pre-Columbian Central American civilization. In one of their calendars (the Mayans had more than one way to measure the passing of time), called the “long count,” this exact date will mark the end of a baktun, which is a 394-year period in this calendar that corresponds roughly to our millennia.

Since the Mayans used a vigesimal (base 20) counting system instead of a decimal (base 10) system like ours, their calendar counted days in groups of 20, called uinal, which served as months, after a fashion. The next largest unit was the tun, equivalent to 18 uinal instead of twenty so that it would correspond roughly to a solar year – 18 x 20 days = 360 days. In turn, a group of 20 tun made a katun (which is 7200 days, or about 20 years), and the longest unit of time was the baktun, equal to 20 katuns, or 394 years.

According to certain calculations, says M. Gauthier, this “long count” is supposed to have begun on August 11, 3114 B.C., which means that December 21, 2012 would mark the end of the 13th baktun. But remember that this date calculation exercise is subject to errors, and certain experts suggest instead the date of December 23, 2012, which is unfortunately too late for the end of the world to save us from last minute Christmas shopping.

And anyway, what would that change? For the industry of all things esoteric, every temporal milestone is a business opportunity – let's remember the year 2000 – and its gurus are certainly delighted to have a new one at hand.

Finally, let's point out that there's a Mayan monument in Mexico that refers to the end of the 13th baktun. The “catastrophists” refer to it abundantly, saying that its inscriptions foretell a catastrophe, but serious experts describe its inscriptions as “vague” at best.